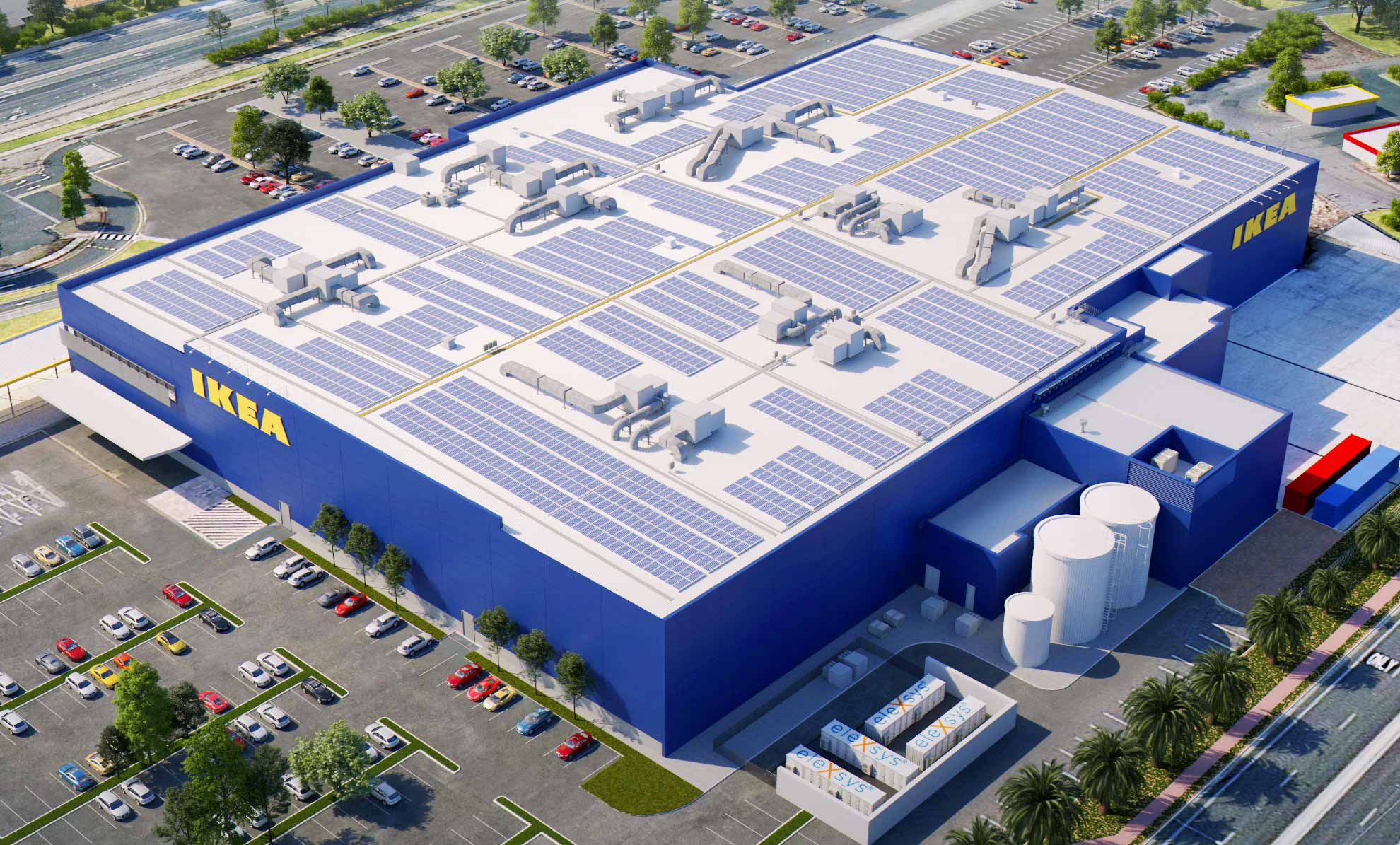 PRESS RELEASES, MICROGRID AS A SERVICE

Planet Ark Power is transforming the IKEA retail outlet in Adelaide into an unconstrained, grid-connected commercial microgrid. The IKEA eleXsys® Microgrid was launched in October as the first solar panels were being lifted onto IKEA’s 14,370 sq meter rooftop.

The $6.6m, 1.2MW solar installation connected to an on-site 3MW battery and Planet Ark Power’s eleXsys Energy Management System eEms has been made possible by a unique partnership between IKEA, Planet Ark Power and Epic Energy, with support from SA Power Networks and the South Australian Government.

The launch of this innovative project comes at a time when Australia’s electricity network operators and energy regulators are increasingly focused on the challenges from ever increasing distributed energy resources (DER) like rooftop solar exporting energy into local networks. Planet Ark Power’s unique, Australian designed, eleXsys technology platform has emerged to provide a cost-effective solution to the curtailment of DER by networks to enable the installation of optimised rooftop solar across commercial and industrial buildings.

eleXsys has been developed by Planet Ark Power over the past seven years at its Brisbane headquarters to dynamically manage network voltages and frequencies from behind the meter. It provides certainty to network operators like SA Power Networks that, as surplus energy is exported into the grid, voltages are kept within the range required to maintain network safety and security. From an investors’ perspective, this significantly reduces the risk of lower returns on investment and increased payback periods.

The reduction in curtailment risk was a major factor in attracting Epic Energy to invest in the 1.2MW rooftop solar installation and enter into a power purchase agreement (PPA) with IKEA to initially provide over 70% of IKEA Adelaide’s energy needs. The excess energy, stored on-site in three 40ft containers of batteries, will be sold into the electricity grid via FCAS (Frequency Control Ancillary Services) and spot market trading, while also providing grid forming services to the SA Power Network.

“It is the unique combination of eleXsys services that provides clean energy to the customer while providing grid stability services via the battery and the eleXsys Energy Management System that stacks up economically,” says Mr Ruddick. “We call this eleXsys’ MaaS (Microgrid as a Service) model that delivers the various outcomes sought by investors, building owners and network operators.”

Epic Energy’s CEO, Clive D’Cruz, believes this project – and decentralised generation more broadly – sets the foundation for a sustainable new energy model that will play an important role in Australia’s energy mix over the coming years.

“Our involvement demonstrates the attractiveness of investing in projects that can safely, securely and reliably export surplus clean energy into low-voltage urban networks,” says Mr D’Cruz.

The IKEA eleXsys Microgrid represents a significant step forward for IKEA in meeting its goal to be carbon neutral by 2030. IKEA is also exploring opportunities to retrofit the eEMS with larger, optimised solar arrays and batteries across the IKEA range of stores and distribution centres, not just in Australia and NZ but across Ingka’s global network.

“With a commitment to achieve 100% of home deliveries to be performed by electric vehicles by 2025, optimising the ability of our outlets to generate and store our own clean energy is a fantastic opportunity,” says IKEA Australia’s CEO, Jan Gardberg.

There are also plans to expand the Adelaide project to include PV shade structures across the IKEA car park. To be built with sustainably sourced timber, the structures will host an additional solar array to increase the amount of renewable power that can be sold into the grid. A further 30% of the store’s energy needs will also be supplied, resulting in IKEA Adelaide becoming 100% powered by on-site clean energy.

Mr Gardberg said, “IKEA Australia is excited to be working with such inspirational partners to help shift the dial on clean energy production in Australia. In the future there is a possibility for IKEA to transform itself into an energy provider that can create and sell clean, renewable electricity to energy networks”.

Planet Ark Power’s Jonathon Ruddick acknowledges the support of the South Australian Government which provided $1.95m from its Grid Scale Technology Fund to Renewable Technology Fund and the cooperation from SAPN to get this innovative project up and running.

“However, three years on from when the SA Government committed to invest in the IKEA eleXsys Microgrid, PV panels and battery prices have fallen to such an extent that, along with the avoidance of one-off, start-up R&D and design costs, similar grid-connected microgrids will stand on their own two feet, without the need for ongoing government financial support,” says Mr Ruddick.

The IKEA eleXsys Microgrid demonstrates that technology solutions will be essential, cost-effective components to how Australian network operators and regulators respond to the DER challenge. Investing in R&D and backing new technologies – particularly those developed by innovative Australian companies like Planet Ark Power – provide an alternative pathway to creating investment uncertainty in renewable energy through imposing regulations that stifle innovation and impede the transition to a clean energy future.