In March 2021, the Age newspaper reported that thousands of Victorian homeowners are being told they won’t be able to feed their excess solar electricity into their network. The rising popularity of rooftop solar installations means there is simply too much power available in the suburbs; it’s difficult for the distributors to control and causing havoc with the networks. Fortunately, there is a solution that allows businesses with larger-scale rooftop solar installations to continue to safely and profitably export excess power to the grid – eleXsys® from Planet Ark Power.

Australia is the world leader in residential solar adoption. Commercial businesses and other large organisations are now following suit, enticed by significant savings on their energy bills. eleXsys makes the decision to install solar even easier, with technology solutions to enable businesses to sell large amounts of excess power into the grid. eleXsys keeps the network operators happy by doing all the power management work behind the meter before the energy is exported back to the grid.

Planet Ark Power is the licensee for eleXsys in Australia. Read on to see how businesses and other organisations with large-scale solar solutions are using eleXsys to improve their financial position while leading the way to a sustainable, clean energy future.

The Story so Far

The Clean Energy Council noted in a recent report that “Australia’s electricity system is undergoing the most remarkable transformation”. Indeed, the small-scale solar sector added more than 3 GW of new capacity in 2020 to record its fourth-straight record-breaking year.

Australia is the World-leader

Across Australia, rooftop solar adoption has skyrocketed since 2009 and is now continuing on its record-breaking trend line. 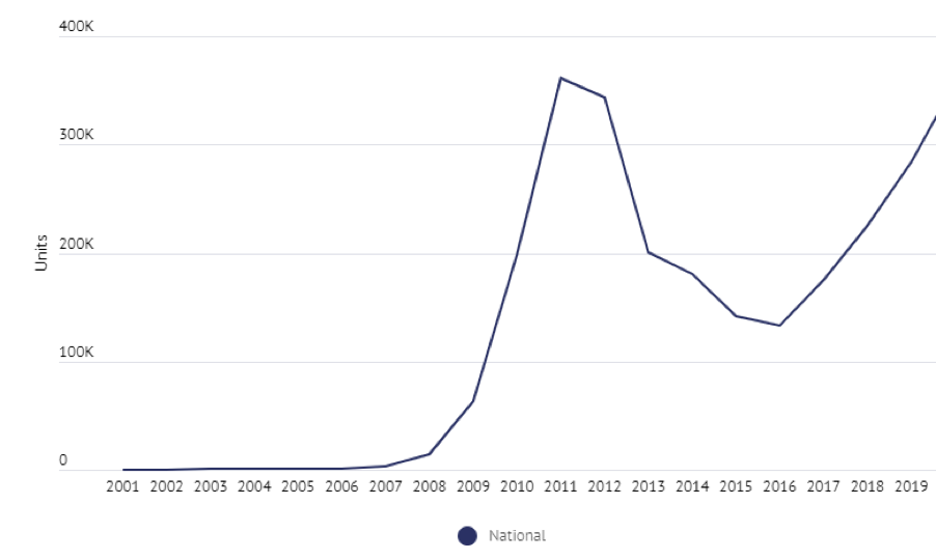 However, there is a major challenge ahead

Rooftop solar system installations in the country during the year 2008 were 14,064 units. In 2019, installations totalled 287,504 units – an enormous increase and little wonder that the uncontrolled export of excess power back to the grid is now causing problems for the power distribution companies.

The ability for Australian households and businesses to maximize their solar investment has constraints imposed by local network operators to deal with increased instability due to high penetration of distributed energy resources added to the grid (who would have thought, when the original grid was designed, that significant amounts of power would one day flow in the reverse direction from rooftops back to the grid?).

While the Clean Energy Council reports that “millions of Australians have already reduced their electricity bills”, the future of exporting excess power back to the grid is uncertain.

Network operators are understandably cautious about accepting an influx of additional ‘raw’ energy, which is known to cause grid instability, blackouts and brownouts (which may lead to significant fines by regulators). Operators have therefore imposed strict rules on the quality and quantity of the electricity that they are willing to buy, carry and distribute.

The result? As reported widely in the media, increasing numbers disgruntled rooftop solar owners who are suddenly taking much longer to pay off their systems. And a slowing in larger-scale solar system procurement by businesses and organisations as the prospect of financial benefits from grid feed-in continues to be uncertain.

Planet Ark Power is the licensee in Australia for eleXsys technology.

The multiple-award-winning engineering solution gives certainty that power can be safely exported to the distribution network.

When you have eleXsys working for you, you can rest assured that the grid voltage volatility problem is taken care of right at the source before your excess power is returned to the grid!

The owners of distribution networks prefer to buy their electricity from the suppliers of quality-controlled power. Furthermore, industry participants at various levels are also lobbying and canvassing for more stringent regulations over the supply of solar power, especially in terms of quality.

“We need to change the way we manage solar and battery systems and how they interact with the grid. We’ll need new rules to mandate technological capability and new markets to make the best use of the capabilities already at our disposal,” the Clean Energy Council states in a recent report.

An example is Australia’s largest of its kind, grid-connected microgrid launched at IKEA Adelaide. Click here to see how this global big brand company is benefitting both commercially and also helping the planet in terms of its carbon neutral goals.

The Queensland Health Department is enjoying a state-of-the-art clean energy solution at its Group Linen Services (GLS), which launders and distributes 330 tonnes of linen to hospitals every week.

Just one of the schools already reaping the rooftop solar benefits is Bayside College in Melbourne. Not only has the college reduced electricity costs by 38 per cent, but it is also experiencing an increased appreciation from students and the community alike. Reduced carbon emissions are protecting both our beautiful planet and the future of our children!

Continue reading here about many more examples of how Planet Ark Power is positively impacting and transforming organisations across Australia.

Let our commercial and industrial solutions work for you

Grid electricity prices are predicted to continue to rise.

The Age newspaper reported in March that “Energy Australia’s decision this week to accelerate the closure of its Yallourn power plant, which supplies about 20 per cent of Victoria’s energy, has raised the prospect of other power stations in the Latrobe Valley closing early, as coal-fired power struggles to compete with renewables.”

Now is the time to consider the multiple benefits that solar power can bring to your organisation. Planet Ark Power’s commercial rooftop solar solution and tailored financial plan mean your installation can be cash-flow positive from day one!

Either way, you and the planet are always a winner with Planet Ark Power and eleXsys technology. Please Get In Touch With Us today.

The sooner you start saving on energy bills using sustainable energy, the better for our planet.